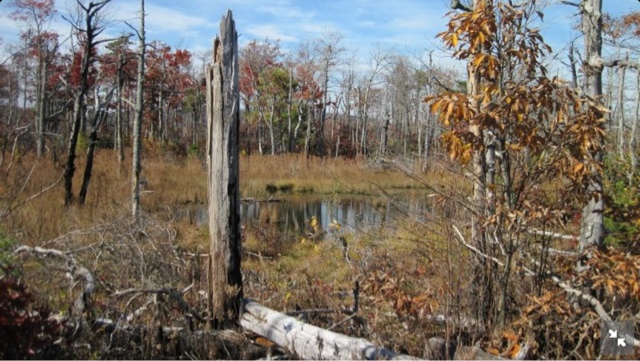 When I went to Shortoff Mountain in the Linville Gorge last October, I had the pleasure of William “Wigg” Faulkner serving me as a guide. He has been visiting the Gorge for years and years, and over the last few years he has been systematically exploring the Gorge’s many rock outcrops, springs, and canyons. Linville Gorge has many secrets, and as another explorer of the area has said, it does not give them up easily.

One of the scenes I had the privilege of seeing, the pond on top of Shortoff, is not a secret nor is it difficult to get to. it is not hidden away along some scraggly rabbit trail, with torn and windblown surveyors flagging hinting at its existence. The pond is right along the main trail, the Mountains to Sea Trail, which extends over 1,000 miles across North Carolina.

This was the first time I had been on Shortoff, and I had heard about the pond on top of the mountain. As we stopped, Wigg told me about the pond and shared fond memories of it. Wigg told me how the pond used to be bigger than it is now, and in recent years, there was a fire on top of Shortoff that scarred and destroyed much of the area. With a longing in his voice, my friend said, “I don’t know if it will ever see its former glory.” To this I replied, “One day, it will.”

The pond on top of Shortoff, like the rest of creation, is subject to futility and hardship and entropy under the curse. The sin and fall of man in the Garden of Eden did not only bring death to man, but all of creation. Once there was Eden, and now it is fallen. Now it is decaying, just like you and I. Thistle and thorns have overtaken the garden, and if you’ve done any off-trail exploring in Linville, you definitely know this to be true. But also like the rest of creation, the pond on Shortoff is groaning and aching for the day when Jesus Christ returns and the great reversal occurs. Sin and death are defeated, eradicated, and will only remain in stories as conquered foes of the Lamb of God who takes away the sin of the world. All creation will be made new and restored to its original glory. Not the glory of pictures we’ve seen from a hundred years ago, but glory of when man was not at odds with God. The glory of when all was right in the cosmos. Like Christians now, like the nation of Israel prior to Jesus Christ’s birth, the pond on Shortoff and the rest of creation is desperately singing “O come, O come, Emmanuel.”

Perhaps you’re wondering where I’m getting all this, and you’re right to think so because I am certainly not smart enough of a man to figure it out on my own. What do you expect from a guy who likes to wander through the woods to say, “Ooh! Pretty !”? The Bible has many places in it that speak of when all things are made new, but I will only get you started:

18 For I consider that the sufferings of this present time are not worth comparing with the glory that is to be revealed to us.
19 For the creation waits with eager longing for the revealing of the sons of God.
20 For the creation was subjected to futility, not willingly, but because of him who subjected it, in hope
21 that the creation itself will be set free from its bondage to corruption and obtain the freedom of the glory of the children of God.
22 For we know that the whole creation has been groaning together in the pains of childbirth until now.
23 And not only the creation, but we ourselves, who have the firstfruits of the Spirit, groan inwardly as we wait eagerly for adoption as sons, the redemption of our bodies.
24 For in this hope we were saved. Now hope that is seen is not hope. For who hopes for what he sees?
Romans 8:18-23 (English Standard Version)

Also, I highly recommend the book Heaven by Randy Alcorn for further study on the topic.

Matt Chandler says in his book The Explicit Gospel, “The aim of the Scriptures is to direct our worship to the one true God of the universe, and the universe itself is designed not to occupy our worship but to stir our heart of hearts to behold its God. The heavens do not declare the glory of themselves, after all, but the glory of God.”

An analogy I thought of while thinking about this is that it is like my marriage. I love my wife, and I love her baking, cooking, parenting, creativity, photography and many other traits and talents…but these all stem from her. I love HER, and many things come with that. If I only love the cookies she makes or the pictures she takes, but spurn her? That is no love at all, but hostility. With Jesus, I long for the renewal of creation, the sinless existence, the amazement of heaven, but without Jesus all of these things would not be. Love Jesus, friends. All good things stem from him.

Next time you are out, and you see creation subjected to futility and decay and death, be reminded that the Lord will one day make all things new. Yet even in that, the renewal of creation is not our hope, but Jesus who brings this renewal.