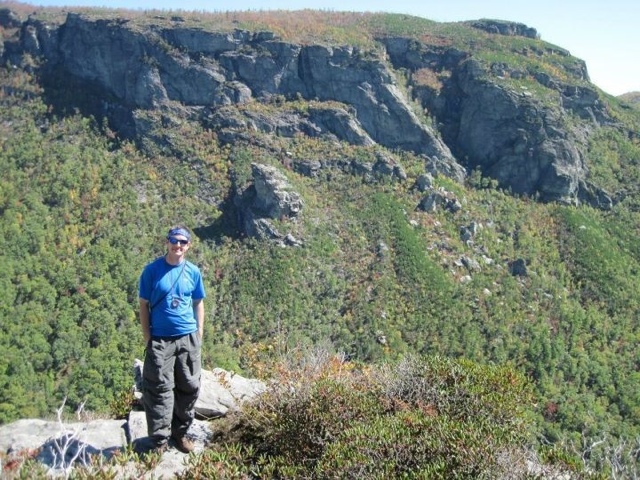 The date is set.

The adventure we have been looking forward to for almost a year is nearly upon us, and we need to do it before Daylight Savings Time is over so we have as much daylight as possible.

Described at the most difficult “hike” in the Gorge, it is actually a complete scramble. Descending down through gullies in the cliffs, hugging walls, fighting briars, climbing trees and ledges, steep elevation, and what are supposed to be the most amazing views in the entire Gorge.

The picture for this post has the LNCW behind me as I’m standing at the edge of Razor’s Edge Rock (a must visit destination in Linville Gorge if you have not been there). The trip will include hiking the Mountains to Sea Trail past the Chimneys to a trail that takes us down to the Mossy Monster descent gully (this is a specific area I need to study. I don’t have a GPS so finding it may prove a challenge). Scrambling down the gully to the base of the cliffs then following the wall will eventually lead us to a ledge that must be ascended. The two options for this are either up a dead tree (dangerous) or a 20 foot ropeless rock climb up to the ledge (also dangerous). Then it will be trying to decide when to head into the bushes towards the Sphinx, the prominent rock feature below the cliffs, which is about 10 stories tall. Once the Sphinx has been conquered, it’ll be back to bushwhacking through briars and bushes until we get to a boulder field at the base of the Amphitheater, the canyon area on the far right side. That will be a stiff uphill climb until we get back out, to where we’ll join back onto the Mountains to Sea Trail. From the point we leave MST to where we are back on it is less than a mile (i think), but the brutal terrain will have us on that route the majority of the day. That’s the best recollection of the route from the data I’ve gathered, and anyone who has been through there already, please correct anything if I’m wrong.

There is much I don’t know, and as October is coming upon us quickly, there is much work and research to be done and questions to be asked. A huge thank you to my friend Bob Underwood for all his help, as well as the guys reports who have done this previously.. Zak Kuhn for all your pictures, Dusty Allison of Blue Ridge Outdoors, Mark Moser, Marshall Weatherman, and the Gorge Rats at LinvilleGorge.net

As someone who was made to marvel, this is going to be worth the effort. If you want to play, you have to pay… that certainly applies to this trip, even moreso than any other rough hikes in Linville.. but I’m willing to go great lengths for these moments.

What started as simply an excited post for an adventure has become a reference point for gathering a few reports and hopefully all the photo sets that have been published online.

“LNCW on 9-30-2012” by Zak Kuhn
The best photo documentation of the route to date, with critical turns highlighted.