So this is actually the first trip report I ever wrote, originally posted at LinvilleGorge.net. My family and I had been to Linville Falls from the Blue Ridge Parkway before, but this would be my first time actually entering the Linville Gorge. There have been a few edits, removing silly emoticons, and changed a few of the numbers as I later found out. The guys at LG.N helped me plan this trip, and warned me that I might be biting off more than I could chew for my first visit. In fact, it was on this trip that I received a piece of advice regarding the seriousness of Linville Gorge that still stays with me:

“Two entities will see your hike: God and Linville Gorge.
If you bite off more than you can chew God will forgive you….. Linville Gorge will Not.”
~ Bob Underwood
One of the things I really want to highlight is how we went up to the top of Babel Tower. We didn’t realize there was a very easy trail that accessed the top, and we scrambled and free climbed up to the top of it from the south face. Way sketchy, but we were all into climbing a lot. I don’t recommend anyone takes that route. Some of the hiking I had done prior that I thought would prep me for this trip was  the Raven Cliff Falls/Dismal Loop in the Mountain Bridge Wilderness of SC, Table Rock State Park in SC, and also some backpacking at Sam Knob and TurkeyPen near Brevard. I was unprepared for how rugged the terrain would actually be in Linville Gorge. Daunting then, it is something I have come to love now, over 3 years and over a dozen trips later. If you’re planning to hike in Linville, and looking at routes on the map, forming a plan, it’s a good rule of thumb to estimate an average hiking time of 1 MPH. You may go less then that, depending on how difficult of a situation you get into, and how many times you stop to take in the view.

Well, we made it! Our PLAN was to park at Pine Gap, hike Kistler to the Babel trail, ascend Babel, then down to LGT up to Pine Gap, check out the rock face there at the toe by Bynum, then out to Kistler back to the car.

Let me start by saying, after my first trip into Linville Gorge, I underestimated it in every way.

Started out praying for our safety, the trip and that we would be marvel more at our Creator than his creation (which I knew I would be inclined to do). Then as we were pulling our packs out of the car, an ambulance drove by with his window down, waved, and yelled “Don’t do it!” but at least he said it with a smile. Hmm, this was when I began to wonder if I underestimated.

We headed up the road from Pine gap and saw a Blue square blaze on the east side of Kistler before Cabin. Does this go anywhere?? Pine Gap parking to Babel parking lot is a long haul, but it was a nice teaser as we could make out the gorge from the road. We finally get to Babel, excited, and ready to bring 2 cars next time we come so we can shuttle along Kistler. There were plenty of just-off-the-road campsites to crash at. I was actually surprised at how all the campsites we came across, even in the gorge, had such significant fire rings/pits. 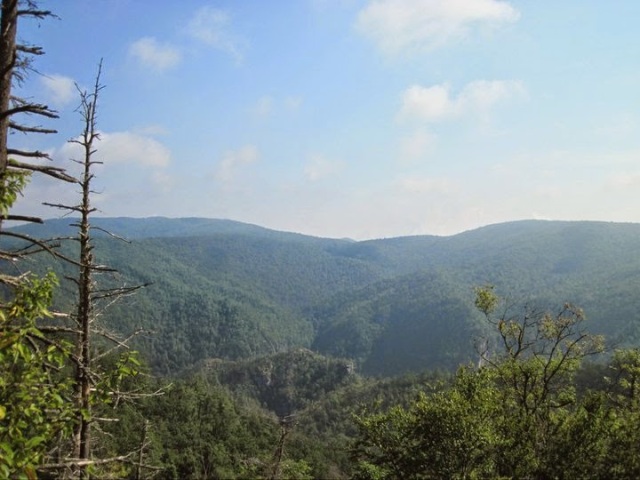 (The view from the first rock outcrop on Babel Tower Trail, Babel Tower is the small peak in the middle)
We hiked down Babel after taking a few trailhead pics to the first rock outcrop where the trail turns dramatically. Wow, absolutely amazing. We took a break here because one of my buddies took off his sunglasses at the Babel parking lot and left them on one of the rails. We watched his pack while he ran back. We loved this view. It was very motivating when the guys who were with me that had not been involved in any of the planning looked down, saw Babel tower, and said “is that where we’re going?!?” It was a pleasure to say “Yeah!” The hike down to Babel tower was enjoyable, with just enough canopy to keep us cool. The trail is so eroded in places it becomes a ditch, but no so bad I guess. As we were descending, I began to understand why I should be more worried about a broken leg or rolled ankle than any wildlife.

We saw several large leafed trees, with clusters of leaves of about 8 or 9 roughly bigger than your hand (on the small ones!) Does anyone know what kind of trees they are? We enjoyed them all throughout the gorge.

So we made it to the Linville Gorge Trail (LGT) and immediately were met with overview sights of the river, then we hopped over the crevasses and boulders, hung over the hanging rock, checked out the cave/shelter overhang, etc. We eventually climbed up to the top of Babel Tower. There’s some trees there that are nice to climb and post off of, making the top easier access. On the way to the pinnacle, there is a pretty sketchy looking rope. I opted for a lift from one of our guys who stayed on the ground. The view of the gorge is absolutely breathtaking. I underestimated the vastness and how huge everything was. I’ve been looking at this through Google Earth for too long. I was blown away from atop Babel Tower. The spirit of exploration soared in all of us in this area. At this point, we had all decided this was the most awesome place we’d been. The exploration and sheer childlike wonder that was induced made this much more than a hike to see some beautiful vista. This was a completely foreign world to the east, unlike anything we’d seen. One friend had spent 3 months in Haiti as a missionary and he said all the dead trees reminded him of Haiti. I really feel like they add a it of beauty to the whole area. Anyways, I wish we would have explored it more thoroughly, but we moved on.

(Erich climbing down the south face of Babel Tower, with Ben waiting below)

We hiked west on the LGT looking for the campsites along the 2nd peninsula. After taking what seemed like a trail down to the river (across mostly boulders really), we ended up at the waterfall/swimming hole. Some guys were already there sliding down the waterfall and jumping off the cliff so we moved up to the campsite on the beach to dip in the river to cool off and eat lunch. We saw a bunch of minnows, but nothing else really. This looks like a great campsite, unless the water is high! After we ate lunch, we were trying to figure out if we had passed the LGTCS4 and were really at LGTCS1, or not. (NOTE: These are campsite names listed on the 2010 edition of the LG map from LinvilleGorge.net) Compass was really helpful here by determining which bend in the river we were facing. Plus, I thought there was no way we had gone all the way up to CS1, so we hiked back up to where we left LGT and continued on. The trails are tough to follow here with all the boulders. I started to get confused myself by the way the LGT curved by this offshoot trail, and I almost convinced myself it was Cabin. Either way we’d end up back towards Kistler so we went on, but I was about 80% sure we were still on LGT.

We met up with some guys who had just come down Cabin at a rock outcrop overlooking the first peninsula. Verified we were on LGT, and gave them some help as they were heading towards Babel tower. I told them we came in Babel and we were planning on hiking out Pine Gap. “Wow you have a full day!” Did not fill us with enthusiasm at this point. I had greatly underestimated how long we would be here. I figured 3 hours to go from Babel to Pine Gap. We were right around 3.5hrs here and hadn’t even hit Cabin yet. We voted to exit on Cabin. The guys from LG.N were right. This is not the Appalachian Trail, and distance cannot be measured normally. I was amazed at how little ground we seemed to cover compared to how much time we spent covering it. LGT is also extremely overgrown with thorny brush, to the point for several long patches we could not see where we were placing our feet.

Coming in, I knew and had explained to my buddies that Cabin would be one of our early exit routes should we decide not to go the whole way. We knew it was approx 900 ft out over 3/4 of a mile, and it would would be steep.. but we were totally caught off guard by what a grueling and miserable hike out this was. This is also where I figured out that I under-estimated the heat. Even though weather.com said 75F for Linville Falls, it was hot and humid this whole trip. One friend said he had done some research and Linville Gorge was actually listed as a temperate rain forest? I’d believe that! Phew! Having a river soaked bandana really helped out here. There were some straight up climbs on rock that were at least 6ft steps. Wow, this was tougher than anything we’d ever done prior. Free climbing Babel Tower was a cakewalk compared to this. At one point, we even saw a trail of blood drops, which only added to the mood of the hike. We all still had water and were drinking it, but even with that… we must have been taking a break every 50ft. I totally underestimated Cabin. I anticipated climbing out via Pine Gap!

Once it started to level off, it was so nice to be back to Kistler, where I just had been hoping a few hours earlier I wouldn’t have to hike anymore of, haha. The thunder also began as we hit Kistler, too. Even though we were ragged out, we were wishing someone would give us a lift but acknowledging that we wouldn’t give a lift to any guys that looked as rough as we did. As soon as we got back to the car and got our packs in, the rain fell torrentially. Coming out from Kistler, we could scarcely see the road at some points! Small kindness from God, surely.

Didn’t go to Wiseman’s or Linville Falls like I had planned, and we didn’t eat at Louise’s. Although, I did stop in and pick up a copy of Allen Hyde’s hiking guide. 2011 3rd Edition. I haven’t had much chance to look through it yet.

One thing’s for sure… we all can’t wait to go back. Enjoy! Thank you all for all your help in planning this trip! I had so much more confidence going in than I would have going in green! I imagine taking someone up Cabin who was not already in love with adventure… that would quite ruin any further adventures for them for a long time.