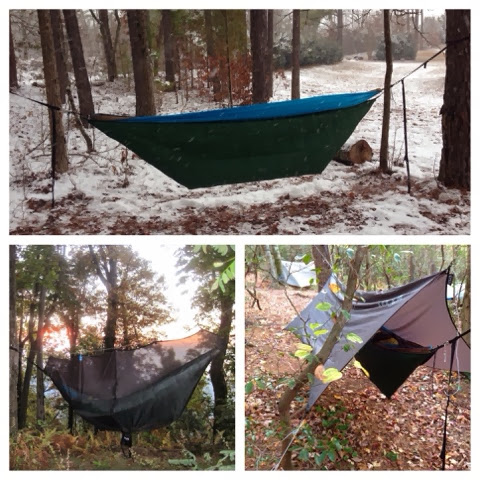 I’ve owned the Eagle’s Nest Outfitters Ember under quilt for just over a year and a half now. I’ve camped out in it 5 times: 3 times in the Linville Gorge and twice in my backyard. Having tested it at several different temperatures, I feel I can finally give it a thorough review. This is for the ENO Ember only, not the rest of the system.
My typical hammock camping setup has consisted of an ENO DoubleNest, ENO SlapStrapPro’s, ENO ProFly and Guardian Bugnet (when needed on either), the ENO Ember for underquilt, and a 15°F 600 fill down sleeping bag opened as a top quilt. ENO fanboy.
I’m more of a base camper than an ultralight backpacker, but weight is still something to consider. The specs on my unit with the included stuff sack are 2lbs .25oz/916g. Once in the stuff sack, it straps to my backpack pretty easy where a sleeping pad would normally store.
The shell is dark green 30d ripstop sil nylon, and the inner liner is 30d ripstop nylon that feels soft yet sturdy. The fill is stated to be Hi-Loft Synthetic Insulation. Except in extreme cases, it seems to cut breeze and wind very well. Having a tarp properly setup will aid in that, as well. One of the downsides to the Ember is that there is NO temperature rating from ENO, though the literature states that “hammock camping is now a 4-season game.”
The setup and adjustment is VERY easy and convenient. There is very little effort to getting the Ember in place. You can view that process here: http://www.eaglesnestoutfittersinc.com/pdf/Ember-Set-Up-Guide.pdf
For the majority of times, I’ve camped at 45-50°F, and the Ember has done beautifully. Last fall I used it at Hawksbill at Linville Gorge, and we had some major windgusts that beat us all night long and pulled up my tarp stakes (lower right in the above picture). The low was approximately 40°F that night. With those windgusts, I had a couple cold spots but some slight adjusting in the hammock worked well. Had I set up my tarp lower and less against the wind, I suspect I would not have even had those spots. Still, I had read a couple online reviews saying the Ember was good down to 25°F, so I wanted to personally test it at cold temperatures.
Enter Winter Storm 2014 in upstate South Carolina. Trying to work with last times tarp setup in mind, I got in my hammock at 11:30PM and drifted off to sleep. Temperature: 29°F. I was fine until about 2:30am, and I awoke to similar cold spots like I experienced in Linville. I shifted and adjusted, trying to keep a diagonal lay (which I don’t feel the Ember prevents). As the night went on, my cold spots stayed with me and turned into a full blown case of CBS (Cold Butt Syndrome). By 3:30am, my cold spots had grown to chilling my whole body and I had to call it quits. Temperature still holding at 29°F. (The top picture above is the Winter Storm, I did use the ProFly that night but removed it for a better view of the Ember) 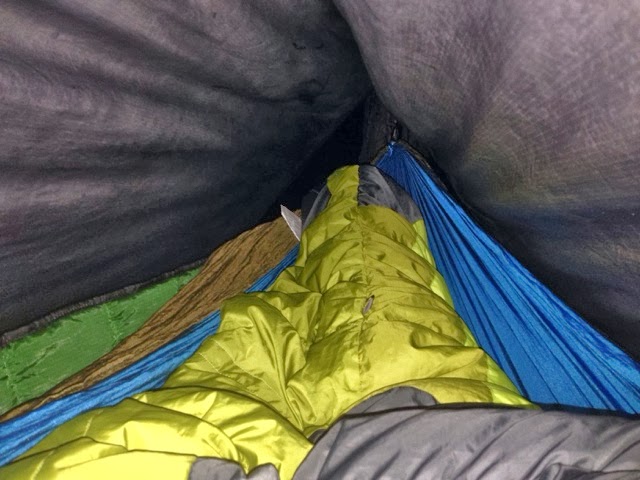 I’m going to have to disagree that the Ember makes hammock camping a 4-season game. For Fall and Spring camping in the Carolina’s, beautiful. I have stayed cozy and snug without a cold spot down to 45°F. Below that, and winds added in, it starts getting chilly. Had I waited until I was out in the wilderness to test the Ember below 30°F, I would have been in for an uncomfortable night. Instead of a sole go-to unit of lower insulation in below freezing temperatures, the Ember seems like it would do well as part of a layering system. If one were to use a sleeping pad coupled with (for the sake of being the ENO fanboy I am) the ENO HotSpot, I suspect it would withstand the temperatures. If I come into possession of a HotSpot and can test it, I’ll update this review.