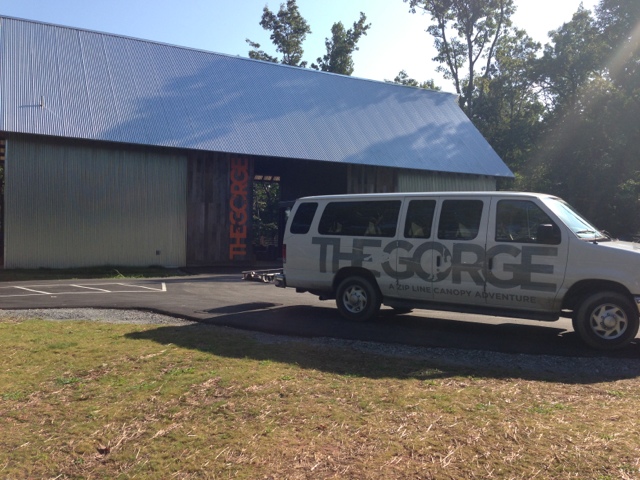 This was the only picture I got from the day with no cameras allowed, but I’ve got a head full of great memories. Know that this was the first time I’ve ever been on a zipline, and it was a total thrill.
For Father’s Day, Jenny and the kids bought me a pass to The Gorge, a new zipline in Saluda, NC. Maneuvering dates around the monsoon rains we’ve been getting hammered with and lining up some company on it, I finally made it with my great friend and fellow adventurer, Erich.
So this trip report, per se, will also serve as a review of this Eco tour.
Prior to going, I had to call in and make the reservations for us. I spoke to Sara who was super pleasant, and even advised that the morning tour would have less chance of afternoon thunderstorms, if that were an element for me. Thank you! 10am it is. I got the confirmation email immediately, and filled out some basic info. Ready to ride.
The drive in is easy access. There’s a nice bold sign at the road directing you to turn in to The Gorge. A bit bumpy on the gravel road, but my low-tread worn out tires made it up no problem. Once parked, the picture above is what you’re welcomed with. We walked up to this cool little outpost, got checked in (which includes a weigh in: gotta be between 70-250lbs), and then poked around while we waited for our group to be harnessed up.
We found a modern and super clean facility (including bathrooms), coffee and water, a comfortable outdoor lounge with a viewing dock of departing groups, a store with The Gorge gear (shirts, hats, etc.), sunglasses, and even a mini-fridge with Gatorade, PBR, craft brews, and more for the return. It is totally comfortable and an easy enjoyable wait.
We met our guides, Devin and MK, who helped us get safely harnessed and helmeted up. Prior to our first zip, we went through some basics of movement and what to expect. There’s a small practice area so you aren’t learning on the first run.
From this point on, I won’t spoil anything for you. I can only tell you that you’ll be having a great time. Tons of fun, awesome views of the Green River Gorge, incredible scenery all around you. Devin and MK kept it professional, safe at all times, and definitely light hearted and fun – the way an adventure should be. They were super knowledgable about the Green River Gorge, and were pointing out rapids, ancient trees, streams, and more. Again, the views were awesome and so great to soak in. Erich and I were commenting during the tour how it was nice to have an adventure and great views that we didn’t have to work that hard for, or slog up a mountain to earn. (A note on “no cameras”: it was nice to not have people around you on a platform texting, fooling with electronics, etc.) Once we finished the last line, there was a short easy hike where we met up with a shuttle ride back to the outpost. Nice!
I want to make a note of the ZipStop system that The Gorge uses. Apparently, they are one of the few zip lines in the USA that use this instead of a hand brake system. Being that this was my first time on a zip, I wasn’t really familiar with how that worked. Apparently, you’re given really thick palmed leather gloves and to slow down you… grab the zipline?? No thanks. The Zip Stop and trolley system that The Gorge uses is top notch.
We made it safe and sound, no injuries, just full of thrills, as we ended our day. We even scored some views and had some conversation about Linville Gorge, which makes anything better in my book.
Closing the day, we took Devin’s advice and hit up Ward’s Grill in downtown Saluda for a burger. That was definitely a great way to close the day out. It’s like Saluda’s version of strawberry-rhubarb pie or something.
For anyone who may have some fear or hesitation when it comes to a thing like ziplines and heights, I would just say not to let that be a barrier for you. This canopy tour was a real treat!
A great day in a new Gorge for me. There’s tons of adventure to be mined out of the Green River Gorge, and zip lining over it is an amazing way to start. Thanks again to everyone at The Gorge who made our trip an enjoyable one!
For more information, directions, videos, and to make reservations, check out http://thegorgezipline.com/.