Skip to the content
My wife Jenny and I had the opportunity to take a hike together this weekend. Just us. Well, us and baby Skylar. It seems like ‘original’ plans aren’t coming together a lot for me lately. The thought was to hike out to the Raven Cliff Falls observation deck. After the November 1st snowfall and the temps still being in the 30’s, I thought it may be too slippery trying to hike it with Skylar in the Ergo carrier. Having been in the same parking lot the previous day for the Coldspring Branch/Bill Kimball loop hike, and I was slipping and sliding on those trails before they had an overnight freeze. I had some idea of what it might look like. I started having visions of a trip we took in Great Smoky Mountains National Park for my daughter Emma’s 3rd birthday. That trail to Rainbow Falls from Roaring Forks was covered in ice and snow, very slippy. Yeah, whatever.. I erred on the side of caution.

Still, we went to a place that was nearly new and certainly unexplored to me. I had a few minutes on Halloween night to venture a few steps into Lake Conestee (CON-is-tee – I asked someone who works for the preserve) Nature Park, so I was eager to see what laid beyond the bridge that crossed the Reedy River.

We parked at the Bridge Entrance, and walked Heron Circle. No luck on seeing any great blue herons today, though. The loop was a really pleasant walk along the outer edge of Sparkleberry Island (according to the Learning Loop informational signage). On the southern edge, there’s an observation deck looking out over the West Bay, which I found quite nice. There were several boardwalks and planks on the trail for when the ground gets soppy wet. My kids would love this, and I plan to take them.
Finishing up Heron Circle, we took a couple connectors, crossed a wooden bridge that a small flock of mallards were watching over from the water, and picked up the Flat Tail Trail, moving south. The was another nice meander through the woods. My goal was to get to the Bird’s Nest Observation Deck and snag a view from the top. Now, I didn’t know it was an elevated platform, but given its name I knew it was an elevated platform. More great views. We weren’t even tired, so I was already thinking about scoring one more spot on this hike. Skylar was still hanging in there, so we would see how she was doing once we got back to the bridge over Reedy River.
Turns out, Skylar was doing just fine. We got on Raccoon Run to my next goal, Easy Bay View. I figured it must be a good one since there was even a sign for it at the intersection. None of the other decks had pointed signage. A really nice elevated boardwalk guided us along the banks opposite of Sparkleberry Island. The boardwalk eventually ended, and the trail was easy to follow and walk on all the way to the East Bay View. This was by far the best and most open view we had seen today. Fantastic!
A short walk got us out of the nature area, and we were on blacktop walking next to baseball fields on our way back to the car. What a contrast. Not necessarily bad. It just gave Mr the gratitude for what a treasure the park is for Greenville County.

This is a great spot not just for your kids, but also for a break from the busyness that is always buzzing in Greenville. Really, if you’re wanting to get into hiking, and looking for something flat and easy, Lake Conestee Nature Park is a great and scenic place to visit. Living in Greenville suburbs myself, my go to spot for an easy hike has been Paris Mountain’s Lake Placid or the section of Sulpher Springs Trail up to the dam at Mountain Lake. Those are still nice family hikes, but for the effort, flexibility, and scenery, I am going to be switching to Lake Conestee. It doesn’t even cost anything to get in. We were able to see a lot of the area, covering 2.75miles in an hour and a half. I can’t wait to see more of what is in Lake Conestee Nature Park.

I really want to encourage you to visit a clean breath of fresh air thats tucked away right in our backyard. For more information and maps, visit http://lakeconesteenaturepark.com 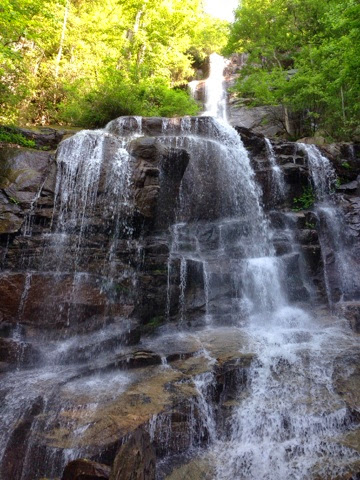 This trip was the official start of The SC Project, my focus to explore the wilds and wonders, highs and lows of South Carolina. What better way to start with a waterfalls that’s been on my bucket list for 2 years running? My friend Chris and I headed up to the mountains to meet Todd, who you’re already familiar with if you read this blog with any regularity.
I’ve been trying to do some online recon for a while, and what I came up with is that the trail to Falls Creek Falls is strenuous and rocky, climbing 1000′ in 1.7 miles. The sign at the trailhead indicated a 2 hour hike, one way, to Falls Creek Falls. Having hiked several times in Linville Gorge, I scoffed at this number and dismissed it. While the FCF Trail is not LG’s PinchIn Trail, it’s still pretty pumpy and will give your legs a workout! I would rate it as more difficult than the neighboring trail to Rainbow Falls in Jones Gap. It is not overly rocky, though there’s a few ruts in it. Definitely not a beginners trail.
The scenery along the Falls Creek Falls Trail was pretty: glowing green with new spring leaves and spattered with the white blooms of mountain laurel. I love the Carolinas. One thing of definite note here is to watch the blazes on the trail. It’s well marked with purple blazes, but there are several side trails. Double blazes indicate an intersection, so it’s easy enough to stay on the right path.  While hiking, though, I noted several areas that really spiked the “I-wonder-what’s-over-there?” side of my internal off-trail exploration meter. Another adventure for another day.
45 minutes after our start time, Chris and I were standing at Falls Creek Falls. The trail brings you to the middle of the falls, and we took the lower fork to get the whole scene in. Very impressive. I walked out just a little ways on the rocks and caught that there was a just as huge upper section of the falls. Even more impressive! That’s the picture that tops this post, by the way. I’m just guessing that it’s at least 100′ high, from bottom to top. I haven’t looked up the specifics of it.
We had gotten to the trailhead a little late, and Todd had headed up to the falls ahead of us. I gave a “whoooooooooo!!” hollar, and hoped that it would cut through the roar of the waterfall. A couple minutes later, Todd is coming down the trail. Good to see you again, bro!!
If you’re a SC resident and haven’t been to Falls Creek Falls yet, you are missing out. You can get here from Greenville in about the time it’d take you to drive Woodruff Rd from Laurens Rd to 14 on a busy day. Maybe less time than Woodruff Rd. It took me 20 minutes to get there from Traveler’s Rest, and it’s outside of the Smstate park, so there’s no typical $2 fee. Only a couple places to park, though. Just be ready to pump those legs, and bring a couple bottles of water or Gatorade with you. It’s worth it at the end, I promise. PLEASE be careful at the falls, though. As Todd said while we were there, “That’d be a bad waterslide.”
We hung out for a while, cooled down from the hike up, and just soaked in the restorative quality that comes from being in the mist of a waterfall. The hike down was quick and easy. We were back at the cars in no time. We had hiked to Falls Creek Falls and back in 2 hours 10 minutes. A nice sweet hike, indeed.
Having some time still, I suggested we go poke around Highway11 a little. We stopped at Wildcat Wayside (the waterfall you can see by the road that usually has a boiled peanuts stand nearby on the pulloff). 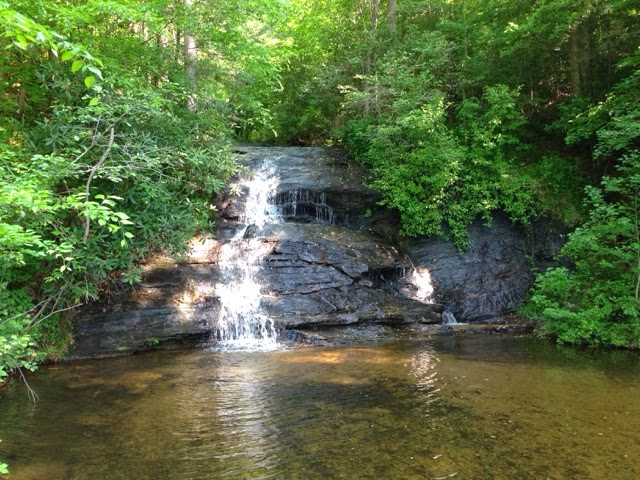 Pretty nice there at Lower Wildcat Falls, and climbing up to Middle Wildcat Falls, I noted there had been several improvements to the area since I had last stopped here a few years ago. 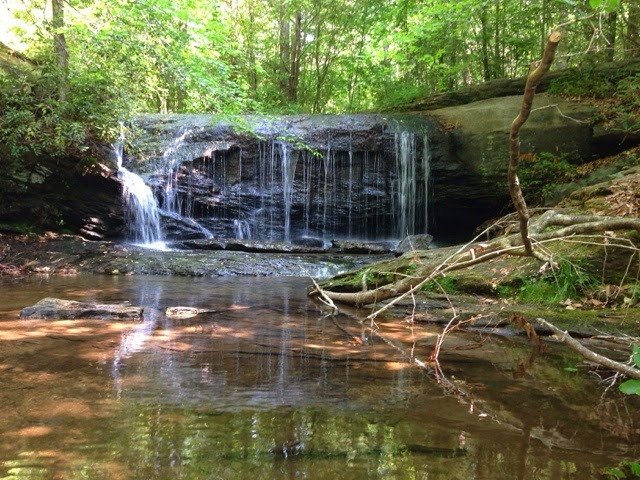 It’s an easy rock hop across the creek. There’s a big kiosk just beyond Middle Wildcat Falls indicating some further info about the trail. We took the right fork of the lollipop loop and passed by a low flow waterfall that was only labeled “falls” but didn’t stop too long to admire. I’d never been to Upper Wildcat Falls, and it was less than a mile round trip, so off we went. What you’ll find here is well made trail on fairly easy and steady elevation that takes you through typical Carolina forest. Very nice for a family hike, actually, as long as you remain cautious. 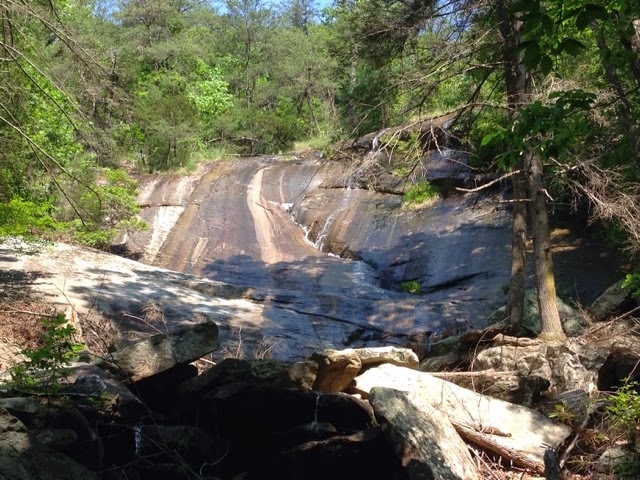 Last year, a man died at Upper Wildcat Falls, and there were a couple DANGER signs nearby, indicating it wasn’t one to mess around with. There is a really cool crack in the rock that the waterfall flows down. Just don’t climb the waterfall.
Back to the car, I had one more waterfall nearby I was dying to check out. It’s been a whole since I’d been to sweet Thing on Slickum, and come to find out the trail has been marked and blazed green at the trailhead. Passing by one waterfall on Slickum Creek that I’m not sure the name of, we made it to Sweet Thing on Slickum in no time. Someone has definitely done some work on this trail! When I first came through a few years ago, the trail was sloughing off and you had to crawl through rhododendron tangles to get back to the falls. There’s still some erosion on the trail, but it’s much improved. The rhodo tangle is gone, thank God. And thank you, whoever cut that stuff out of there!

Sweet Thing on Slickum is an 18-20′ waterfall located in a grotto. It’s one of my personal favorite waterfalls in South Carolina, and I love being there. Too bad I was now pushing the limits of my time windows, and I had to start heading back home.
Definitely a great day out in the woods. A huge thanks to Chris and Todd for going out there with me. Not to bad to see 7 waterfalls in 3.5 hours worth of hiking.
South Carolina, you definitely treated us well today. I’m looking forward to hanging out with you some more, and hopefully we’ll both be making new introductions.