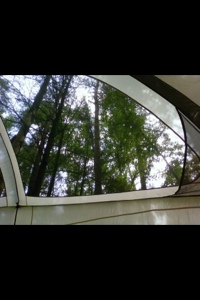 “I hate the outdoors.”

This is what I used to say. We camped in campgrounds a few times, and went fishing a few times. A couple times we camped out in the backyard, which was pretty much just an experience in the cold. I enjoyed bike riding as a teenager, but those rock hard legs I used to have softened up once I got my driver’s license. I went to Rocky Mountain National Park in Colorado with a church youth group in 2000, and I merely thought, “This is cool.” I had no awe, I was not enamored. I was not captured by the splendor before my eyes.

Even when I was growing up, my parents would get out the slide projector and the big silver screen and we would watch slide shows some nights (I’m not as young as I may look). We would see slides of my dad’s trips out west. I cannot recall all the places I saw, but I know my dad has been to Arches, Bryce, Grand Teton, Yosemite, Yellowstone, and more. More times than I can remember, he took me outside and showed me constellations in the night sky and taught me about the stars. Even with the slides, the stories, the stars, and the sparkle in the eye of someone who has experienced the wonder of realizing the world is bigger than one man’s place in it… I failed to catch the bug. The seeds were definitely planted in my youth. Thanks dad.

In 2005, we moved to South Carolina, where I continued to be more interested in Futurama and Halo than I was in North Carolina or Utah. I became friends with Tom, who was clearly had a passion for the outdoors. For several years, he kept telling me, “I’ve gotta get you out.” In the summer of 2009, he did. He took me to Lake Jocasee in the north western border of South Carolina. Nine miles via boat, we finally set anchor and pitched our tent along the Foothills Trail. The picture for this post, which is the only one I have from this trip, is what I first saw when I opened my eyes the next morning. After that, we hiked to a waterfall pouring into a lagoon and went swimming. This was fun. In Spring 2010, Tom and I joined a couple other guys from church, and we backpacked to Sam Knob and Devil’s Courthouse in Pisgah National Forest, which is adjacent to Shining Rock Wilderness. Tom taught me about reading a topography map, paying attention to my surroundings, trip planning and Backpacker Magazine. He really took me under his wing to get this bird off the ground.

In April 2009, I met Erich. He kept asking me to go rock climbing at the gym (Climb @ Blue Ridge on Bulls Rd). Finally, I went, and it was super fun. We went several times after that over the winter and the following spring we wound up climbing at Crowders Mountain State Park in NC. Then in July 2010, we adventured at the New River Gorge in WV along the Endless Wall. I believe this was the trip that REALLY grabbed me for adventure.

A few dayhikes and waterfalls later, I planned my first guys overnight camping trip. We camped along Kistler Memorial Highway at Linville Gorge and did the central (legal) section of Rock Jock trail, with side trips to Razor’s Edge Point, Razor’s Edge Rock (which is one of the most thrilling outdoor experiences I’ve ever had), and Hacker’s Point. Thank you everyone who encouraged me on the planning of this trip.

It took many years, and many seeds planted, especially by my dad. Thanks for all of the places you showed me when I was a kid. I wish I had paid closer attention and had much more fervor than I did. Even though it’s late, I can say with total honesty….

I love the outdoors.