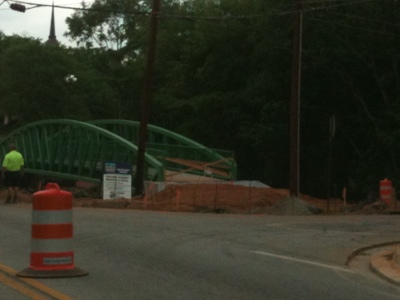 The Swamp Rabbit 5k is tonight, and I’m excited to be participating in it with my wife, Jenny.

The race, however, is not where most of my excitement for this trail is. Last year, I started biking the Swamp Rabbit from Traveler’s Rest to Greenville. Recently, there has been progress on Cleveland St and it’s almost done! A 170 ft bridge that crosses the Reedy River near the entrance to Greenville Technical College is getting it’s finishing touches as of this morning. From there, the trail continues all the way to S Pleasantburg Dr. From tip to tip, I believe the length is approximately 14.5 miles now. This will be a great trip once this stage is completed!

In Lake Conestee Nature Park in Mauldin, there is already a network of walking and iobiking trails. One of these is the Swamp Rabbit. It goes from Lake Conestee to the I-85 ptytlppoverpass on Parkins Mill Rd. Eventually, this will be connected to the main artery of the Swamp Rabbit. I’ve speculated about routes it will take. I know there has been some controversy over the trail going through private land, but I’ve also heard that a compromise is coming along well. Perhaps it’s already happened and I don’t know the results. As I can see it, best result is to take the Swamp Rabbit along the golf course and the Reedy River, following it under Pleasantburg near the South Pleasantburg Nursery (which has a TON of stuff, if you’re into plants and gardening and all that) and finally connecting at the overpass on Parkins Mill. But who knows.. I’m just speculating.

I have only been on the Swamp Rabbit once this year, but I’m itching to get back on it. Hopefully that will be the next excursion after Panthertown Valley. It really is a great way to get outside and enjoy Greenville if you haven’t done it already.

But until then, we’ll be joining 4500 other participants in the race tonight.

See you on the Swamp Rabbit, Greenville!