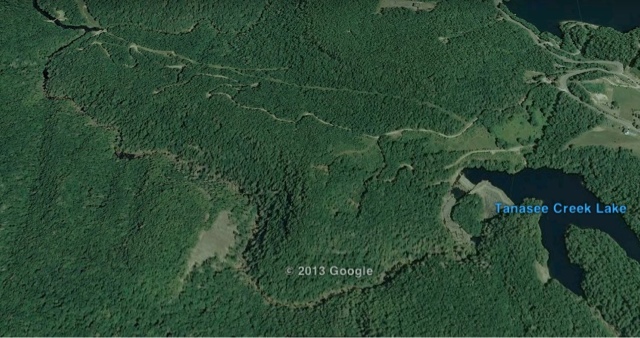 Bonas Defeat Gorge has been dancing on the top of my 2013 bucket list, and the window may be coming to finally drop into this high adventure exploration.

I thought it would be helpful to collect some of my findings in one place (here), not only for my sake but for anyone who may be looking into going. This will be a difficult hike through water and wet rocks, literally through the force that carved out the gorge itself, the Tuckaseegee River. There are waterfalls, slot canyons, pot holes, slick rocks, and more. These are not merely the payoff destinations, but also the obstacles that indeed make the journey the destination.
I first came to know about Bonas Defeat when I bought Burt Kornegay’s “A Guide’s Guide to Panthertown.” (If you’re in Greenville, SC, this excellent map can be bought at Mast General Store downtown. Otherwise, you can buy it ay Kornegay’s website, which I’ll lost all websites at the bottom of this post). Internet research led to finding a few trip reports and YouTube videos, but based on the info I can find, I think it’s safe to say that not many people venture into Bonas Defeat. At least venture in and document it.
As to the time and mileage and that kind of thing, the hike at the bottom of Bonas Defeat Gorge looks to be approximately 2 miles long, and the estimates I’ve gotten for a time frame it takes to do it is 3-5 hours. I’m not sure if that time includes the road walk to complete any loop.
What IS Bonas Defeat? That is actually the name of one of the cliffs in the Gorge.  Legend has it, and if you’re reading this you’ve either already researched and found this info OR you’re especially nice to read my ramblings, errmm… Legend has it that a man had a dog named Bonas who used to chase deer and such off the edge of this cliff. One day, a deer outsmarted him and sidestepped, and poor poochy ran straight off the cliff and fell the 400′ to his defeat… BONAS Defeat. Yep. Anyway.
There is a dam at the Gorge that has an automatic spill gate. If the dam gets too full, as best I can tell and can’t find any release schedule, it opens. This means that Bonas Defeat is a severe hazard for flash flooding. In wet weather, it’s a definite STAY OUT. We’ve had a lot of that lately. As much as I likely a sketchy adventure, being caught in a flash flood doesn’t sound like my idea of a good time. Neither does dying. Use caution on the “when” side of the planning.
For gear, I am pretty much looking at basic hiking pants, probably zip offs, and wicking shirt. Leaning towards Chaco’s for footwear, although FiveFingers are tempting. I’ve considered using an old pair of socks inside out OVER the FiveFingers once I get on the slick rock. We’ll see.
Right now, that spill gate and the rain we’ve been having is making me consider Bonas Defeat sometime in late August to September. At least I would hope to do it then. Possibly I might even be able to wrangle up a posse to go on this wet and wild adventure. Hidden caves, slot canyons, river hiking, scrambling… and then once at the end, another slot canyon up to Paradise Falls.
Who’s in?
Here are some of the links I’ve used in researching Bonas Defeat Gorge. I hope you may find them useful as well.
(Rich Stevenson’s site on Bonas Defeat)
http://www.ncwaterfalls.com/bonas1.htm
(Rich Stevenson’s site on Bonas Defeat)
http://www.pbase.com/waterfallrich/bonas_defeat_gorge
(Song of Myself: A Bonas Defeat Photographic Extravaganza)
http://singthebodyelectric.blogspot.com/2006/06/bonas-defeat-photographic-extravaganza.html?m=1
(Blue Ridge Outdoors Magazine: Mapping the Secrets article)
http://www.blueridgeoutdoors.com/hiking/mapping-the-secrets/
(Burt Kornegay’s “A Guide’s Guide to Panthertown”)
http://www.slickrockexpeditions.com/map_request.htm
(Nantahala, Tanasee and surround lake levels)
http://www.duke-energy.com/lakes/nantahala/nantahala-lake-levels.asp