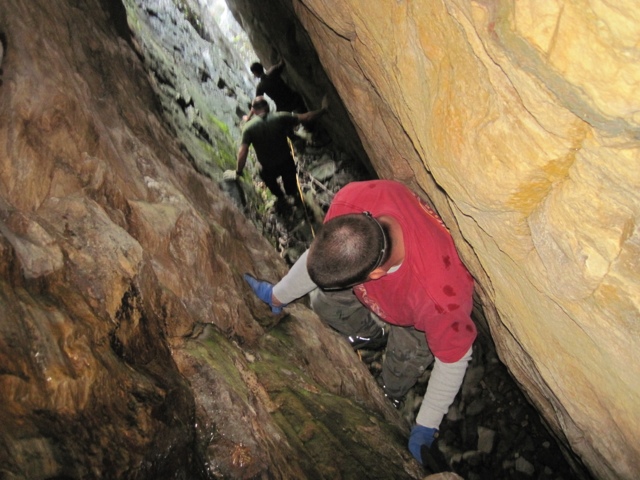 I recently drove up to Linville Gorge for the *Fall 2012 Gorge Rat Gathering. We’d be ratting around on Shortoff Mountain, covering the majority of its trails today. This would be a full day.

I arrived at WolfPit at 7:30am, screwed around with my gear, and finally hit the trail up Shortoff at 7:45. The sun was rising and a low lying fog lazily coated Morganton and Lake James. Taking the long way up (as opposed to the old Jeep Trail), I was met with my first sights of the Gorge as I came to the cliffs of Shortoff. What a welcoming sight! There is something about that first high view visual of the Big Ditch that is really special. I don’t know if it’s a sense of finally being in one of my favorite places, if it’s the mountain air, if it’s an endorphin release, or something entirely different. If you’ve been to the Gorge, you know what I’m talking about.

I continued on along the main trail, stopping for every overlook, spotted Wigg’s Point (which is directly above the Crack of Doom), passed the Gully Pipe and eventually came to a clearing full of hammocks. I knew I was in the right place. After over a year of participating in the forums at LinvilleGorge.net, I was able to meet some of the guys face to face.

My first scramble with the Gorge Rats would be into the Crack of Doom. As far as we know, only Bob Underwood (Credit goes to Bob for finding and naming the route) and his friend Cato Hollar had been in it. Wigg had done the scouting and found the entrance hole on a previous trip, and now we found ourselves standing at the mouth of what would be one of the best scrambles in Linville Gorge. We bushpushed our way down a scratchy gully and came to a hole. A couple guys opted not to even go down at this point. Even though I went down, I foun myself asking the question that seems to come up on many Gorge expeditions: “We’re going down THERE?” It was going to get much better, or worse…depends on how you look at it.

So down the rabbit hole about 8 feet and we’re back on the ground. In a few more steps we emerge at a drop off., with a small ledge and a hole that goes back into the mountain. Headlamps on. We enter into a floorless fissure cave. Well, it has a floor, but it’s at least 20 feet below us. The floor gains elevation as it reaches the back of the cave, so it’s accessible, but only by walking a small 6″ ledge (at the best spot) while holding your body weight against the opposite wall. Five of us pile into the back of the cave, enjoying the natural air conditioning, then begin to head down the crack one by one. There is all kinds of loose rock and debris in the fissure, so careless steps could send that rock and debris careening down the crack and onto the noggin of the descender. One at a time.

There are three rock shelves, and reaching the lower levels involve having to chimney your way down. If you’re unfamiliar with this term, in the scenario of this crack (which is probably 3feet at its widest spot), it means you press your feet against one wall while applying pressure to the other wall with your back and shoulders. You then use variations in the rock as footholds and handholds, and work your way down while you keep applying pressure to both walls with your body. 10 feet down to the second level, then half chimneying/half climbing down another 8 feet to the third level. The chimneying is much easier than the climbing, because climbing down has the greater difficulty of not being able to see any foot or handholds. Of course, there is always the thought that the rock you’re using as a handhold may have some nasty spider or venomous snake living behind it. Once at the bottom level, you can scurry down the ledge to what we called “The REAL Crack of Doom,” but it’s more appropriate to call it the Suicide Crack because it would be suicide to descend it. There is ado much loose stone and talus in the crack that any attempt to use the route would be an express elevator to the bottom, guessing 100ft below, and even if you were to use a rope and a helmet, you’d be bombarded with falling rock. An all around bad place. Once below the shelves, a tight 90 degree turn puts us into the Serpentine Crack IN the mountain, where you might have 18″ of wiggle room to slide yourself through. The crack empties you out onto a beautiful balcony on the side of the cliffs of Shortoff Mountain, giving possibly the most amazing northern view of the Linville Gorge. It is prime for wonder and awe, marveling at what a creation the Lord has made. But after so long, one has to work their way back UP the Crack of Doom.

Upon emerging, we took a bunch of pictures and talked about the Crack, then split up. The group I was in went to the Olson Trail along the cliffs of Shortoff. This is an easy trail as far as Linville Gorge goes. If you’re looking for it, coming up from Wolfpit parking area, it’s about 22 steps past the Mountains To Sea to the river intersection. Turn left, and look for remnants of white flagging. Olson offers spectacular scenery from Shortoff mountain, and it’s always changing. You’ll hike along some flat areas, sidehill, scramble over some boulders and under some ledges, and pass by some magnifiscent rock walls. Wigg took me to the Spring Tree, and View One, and his tunnel nearby View One which also offers a splended campsite (save there is no water). But the Crack of Doom was really the star of this day..